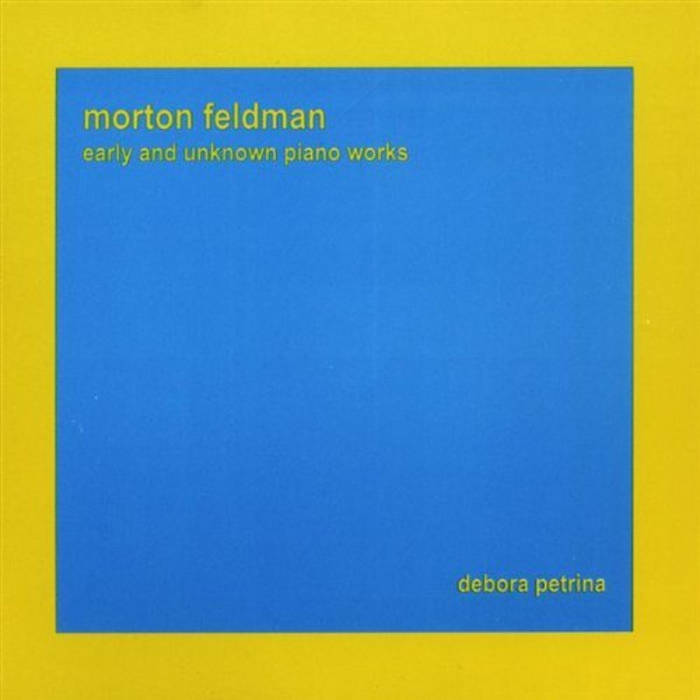 Most of the music heard on this CD will contradict your expectations: "it does not sound like Morton Feldman". The first three pieces are early essays in composition; unpublished manuscripts from the vaults of the Paul Sacher Foundation, Morton Feldman Collection in Basel, Switzerland, where the bulk of Feldman's music is preserved. These works are obviously very distant in style from those published in later years.

Should one's juvenilia be offered to the public ear or not? We do find significance in the early essays simply because to experience the process which shaped the personality of master artists is fascinating. And historically it becomes hard to emotionally separate the observation of these documents with the aesthetic experience itself. Many intriguing aspects do emerge from hearing these pieces, most of all the lyrical attitude embodied in explicit melodic processes which Feldman sometimes allowed to surface in his work, such as in the pieces Only for solo voice, or the famous 'Hebrew' melody at the end of Rothko Chapel.

In a text published in 1962 Feldman provides biographical clues about his early years: "At the age of twelve ... I was fortunate enough to come under the tutelage of Madame Maurina-Press ... . I composed little Scriabin-esque pieces, gave up practicing the little that I did, eventually abandoned my teacher and found myself at fifteen studying with Wallingford Riegger, who was equally lax with me. I must have had a secret desire to leave this dreamlike attitude to music, and to become a "musician," because at eighteen I found myself with Stefan Wolpe. But all we did was argue about music, and I felt I was learning nothing." If we are to follow these indications, of the first three pieces collected here - written in the years 1943-45 - we find the First Piano Sonata at the end of the Riegger period, while the Preludio and Self-Portrait fall under the supervision of Wolpe. Written within a span of less than two years, these three display very different attitudes to form, and very different styles.

While one can hardly find here traces of the "Scriabin-esque", which by then may have been overcome, the dedication to Béla Bartók in the First Piano Sonata – not followed by a Second – reveals a role model for the 17-year-old composer-pianist; Bartók perhaps the greatest composer-pianist of modern music of the time, and living in New York. Thus, Bartók must have been, if for only a moment, an important influence for Feldman (does this dedicatory attitude forecast the many "FOR ..." works to come?) Also, the adagio of Bartók's Sonata may be the source of the mood and mostly homophonic conduct of Feldman's own sonata, a bizarre specimen of its genre. Recalling the years with Wolpe, Feldman remembers that "one theme persistent in all our lessons was why I did not develop my ideas but went from one thing to another. 'Negation' was how Wolpe characterized this." Articulated as it is in curiously magniloquent yet fragmentary moments, the Sonata is entirely built upon such 'negations', but seems much more consistent and effective than what the recollection suggests, provided with a clear dialectic between two characters – not 'themes', just gestures. The manuscript is very different from mature Feldman, calling for grandioso gestures. It ends with an initialed indication "Finished in Woodside on Friday, the 29 of October at 2:A.M."

The Preludio and Self-Portrait, written in the free polytonal manner of the sonata, display a more 'professional' attitude to counterpoint and clearly demonstrate Feldman's attraction to very long, mostly descending, melodic lines. The Self-Portrait, whose title bears an early reference to the world of painting, demonstrates other Feldmanesque features with its prominent chromaticism - which, thanks to a peculiar pedalling, occasionally leads toward the formation of clusters. All this happens within a framework of an expressionistic attitude which is soon to disappear.

Feldman's involvement in the New York modern dance scene during the early fifties is a topic to be further investigated. For many years his catalogue listed only one piece explicitly written for dance, Ixion (1958, for chamber ensemble), but works such as the Nature Pieces and Variations for solo piano have resurfaced and tell a different story. Very soon after meeting John Cage, Feldman started to compose music for solo dancers with clear-cut rhythmic articulation -- apparently functional, yet part of the same sound world of his informal (non-dance) piano pieces of that time. These features become very apparent in the Three Dances, written some months before the Nature Pieces, and first performed in 1951 by the pianist Edwin Hymovitz for Merle Marsicano's dance performance. The third movement is actually a percussion piece, with the right hand playing a drum and a glass, while the left hand hits the same chord all the way, unmistakably the soundworld of Cage.

The very short For Cynthia is nothing more than a curiosity and is included as a complete, finished and titled piece, leaving one to speculate whether it was meant more as a joke (or exercise?) for Feldman's second wife. The date is uncertain, it could have been written anytime in the fifties and its style hardly reveals anything in this sense. There is indeed another well known piece dedicated to Cynthia, that is, the Piano Piece 1956a.

One can understand why works for three pianos (or more) are rarely performed, but it is less apparent why a masterpiece such as Two Pieces For Three Pianos (1966) has not been recorded before. Debora Petrina plays all three parts and conceives, together with engineer Glenn Freeman, a performance which aptly does not aim to simulate a live act but rather becomes an entirely different listening experience. She says "Notation, as ever in Feldman, at a first glance seems very precise and unproblematic, but it is indeed very challenging and productively ambiguous." There are many puzzling elements in this work -- as elsewhere by Feldman -- such as the seemingly inconsistent use of white and black grace notes, which actually call for an even subtler nuancing of the durations, or some strikingly thick chords, absolutely impossible for just two hands (a matter to consider is whether "three pianos" requires more than three performers). "Again" says Debora "what you see isn't definitely what you get. For instance, apparently the first of the two pieces is an 'informal' one as you may expect, with two piano parts filled with sound aggregates to be held until they fade, but the third piano is written in a totally different fashion, with precisely written durations and metronome markings which change at every measure. Just two fermatas, separated by one single chord, are intended to adjust the fixed pace of this part to the free, space-dependent duration of the other two. Three live performers couldn't help noting the fact that these fermatas are exactly in line with chords in the other parts, but following this suggestion would be a mistake: these fermatas are intended to cover no less than a third of the entire duration of the piece! Time, by Feldman, is never an a priori of musical writing. It is the same when you get close to a painting by Mark Rothko -- as he wished to -- what is near becomes distant, the flatness of two dimensions reveals an enormous depth, a narrow strip of denser paint broadens in perception to become an unexpected open space ..."

The same dialectic between free and strictly measured duration appears in the second piece under a different light. Here one piano enters when the preceding begins to fade, giving birth to a continuous line which in turn fades out on a fermata and again is interrupted by a precisely coordinated section.

"In playing this piece" says Debora, "I have tried to find as much variety as possible within the fascinating limitations upon which Feldman has built his sound world. It is obvious that sometimes single sound events, such as chords or more complex rhythmic aggregates, step in the foreground just as sudden, violent paint clots encounter the eye which is closely scanning an overall calm surface, while elsewhere the matter is more gently flowing and would eventually give us the illusion of a disembodiment ..."

I'm an Italian composer, singer and pianist, active in the rock-jazz-pop and in the contemporary music scene. I play piano, keyboards and electronics, and I currently perform alone and with a band (guitar, bass, drums).
I have produced three albums with my music, with guests like Elliott Sharp, Jherek Bischoff, John Parish and David Byrne, who has supported my music also through his web-radio. ... more

Bandcamp Daily  your guide to the world of Bandcamp